Composition of the Senate

The Senate in the 14th legislature is composed of a total of 265 senators, chosen in a dual procedure:

The majority of Senators are elected in provincial constituencies: each province elects four Senators. However, in the insular provinces, each island or group of islands is classed as an electoral constituency, with each of the larger islands (Gran Canaria, Mallorca and Tenerife) electing three Senators and the remaining islands (Ibiza-Formentera, Menorca, Fuerteventura, Gomera, Hierro, Lanzarote and La Palma) electing one Senator. The populations of Ceuta and Melilla each choose two Senators.

Senators elected by constituency are done so via universal, free, equal and direct suffrage and by secret ballot, with voters consisting of Spanish nationals aged 18 and above who have not been deprived of their right to vote. The requirements for standing as a candidate and being elected Senator are the same as those of voters, with the additional condition that there not be grounds for being ruled ineligible.

Each voter may cast three votes in the provincial constituencies, two votes on the larger islands and in Ceuta and Melilla, and one vote on the remaining islands.

Although on the ballot paper candidates are grouped together by political party, when it comes to voting and counting, candidacies are individual, in such a way that voters may vote for candidates from different political groups. The system is therefore different to that of the closed party lists for the Congress of Deputies.

With regard to Senators appointed by regional Parliaments, there is one established for each Self-Governing Community and another for every one million inhabitants in their respective territory. Therefore, the number of Senators that make up this second group is variable. In fact, the number has increased in recent Legislatures as a consequence of the increase in population. 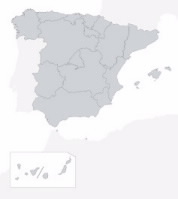 The appointment of Senators by regional Parliaments is carried out by means of indirect or second-degree election, in the sense that they are not elected by the population but rather by the elected representatives of the population (the members of said Parliaments). The only requirement made in the Constitution is to ensure adequate proportional representation, which means reserving, for each Parliamentary Group in the respective Parliament, the number of seats that is proportional to its size. Each Self-Governing Community regulates the election procedure in its Statute, Regional Act and/or Regulation of the House. Some Self-Governing Communities require or allow for elections to fall to members of their Parliament, with the consequence that the elected individual takes on a double mandate. Others, in contrast, exclude this requirement and allow people outside of the Parliament in question to be appointed as Senators. They are also usually required to be a resident of the Community making the appointment.